On July 25th 2015, Web Music Hackathon #4 was ran with GDG(Google Developer Groups) Kyoto at Kyoto. AMEI(Association of Musical Electronics Industry) provided digital musical instruments as usual for this hackathon. We thank AMEI for supporting this hackathon all the time. This time KRP(Kyoto Research Park) provided us a great room at great location at Kyoto! We also deeply thank for this help.

At the hackathon, 10 applications were developed/hacked by over 30 attendees, and 3 applications were developed/hacked by tutors. At web music hackathon always gives developers funny development environment because we can listen lots of sound, and also can listen singing by Pocket-Miku(singing device). Definitely, this time was not an exception. Especially, KORG first provided us little Bits Synth Kit with MIDI modules at first time, so the room was full filled with lots of analog synth sounds sometime🙂

Picture at the hackathon is here

Ok, let me introduce what happend at the hackathon along the schedule of that day.

At first, I introduced our three of great tutors, who are @g200kg, @aike1000 and @sascacci, and they gave us presentation with several great demos. 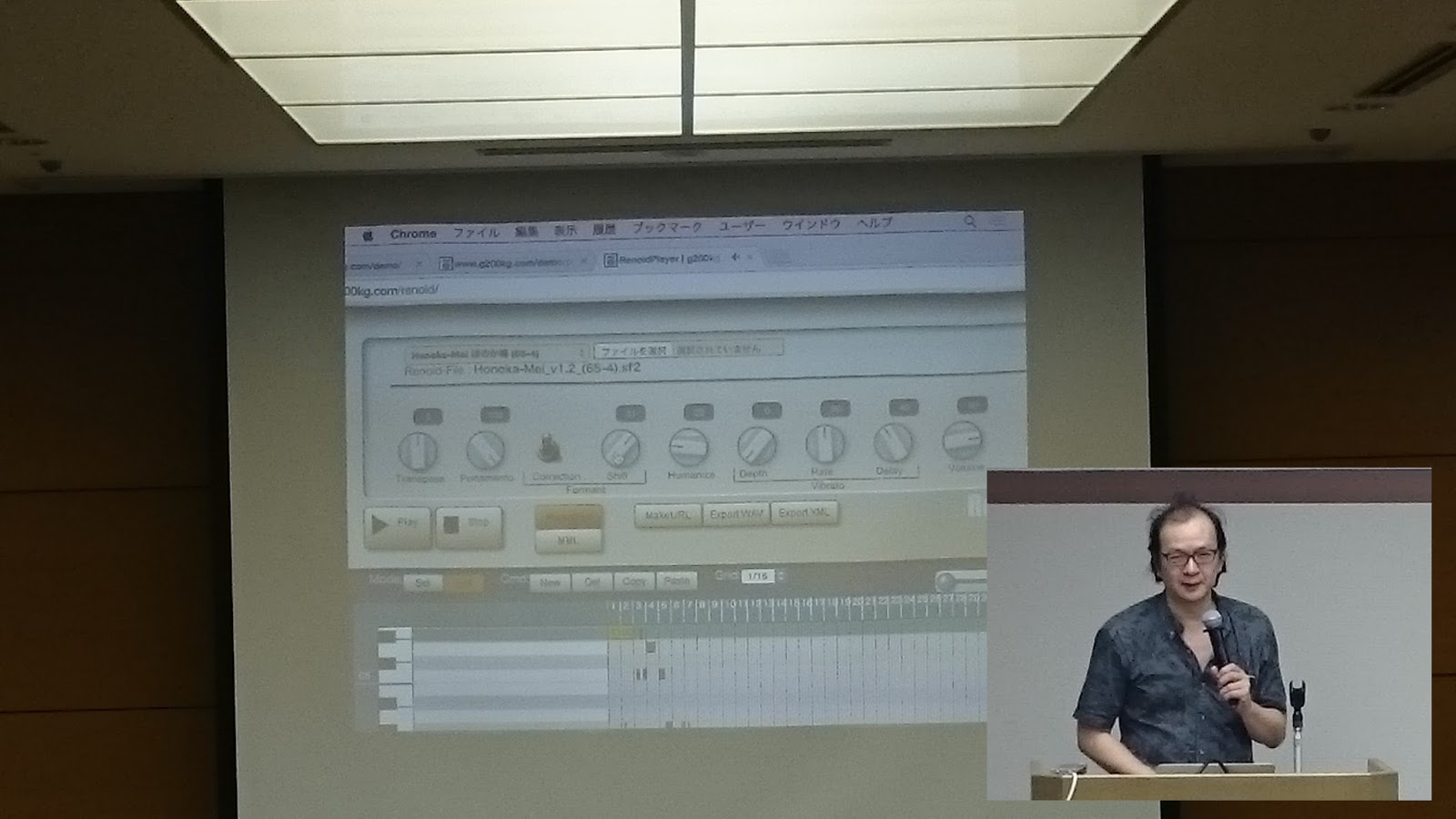 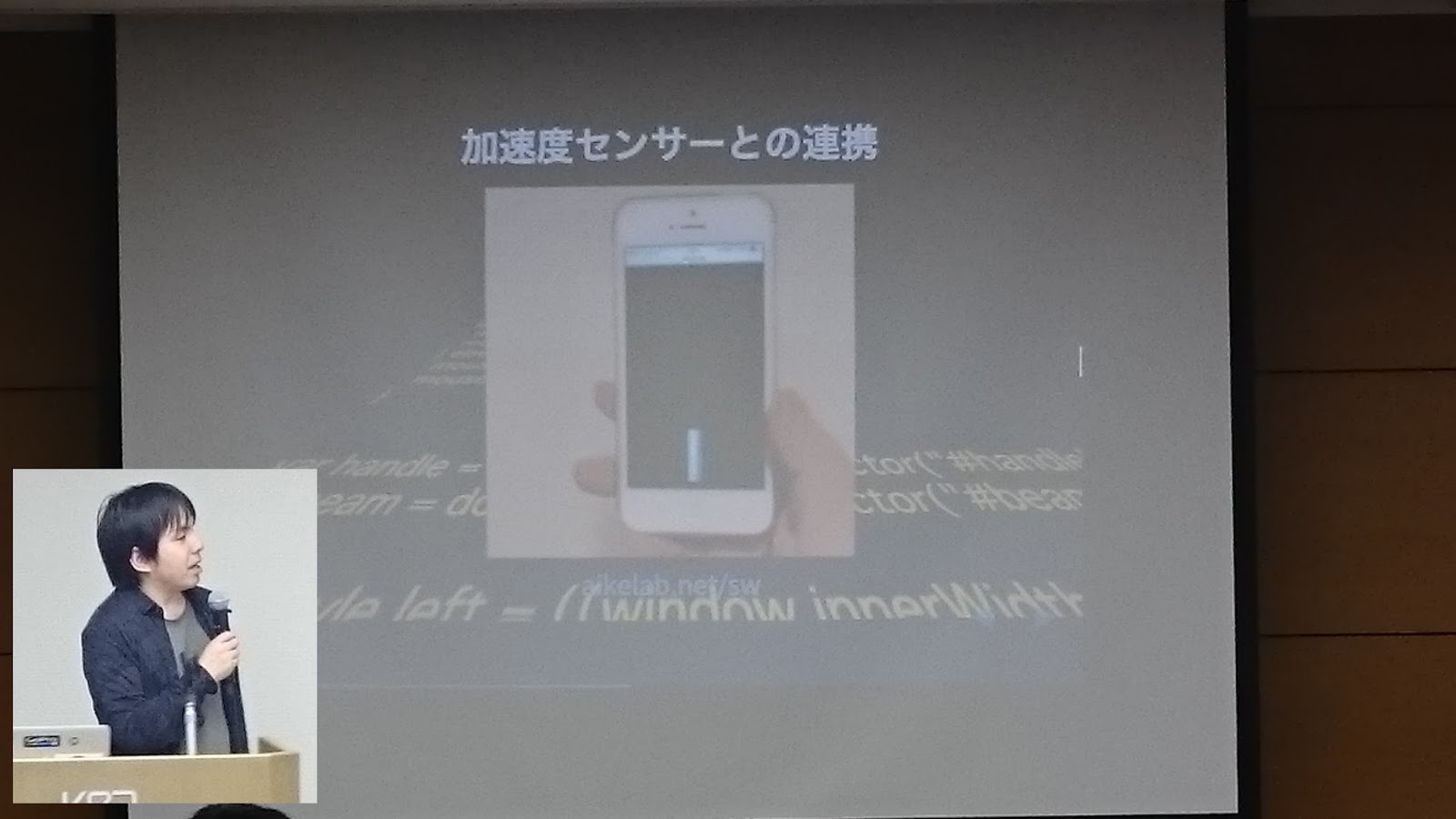 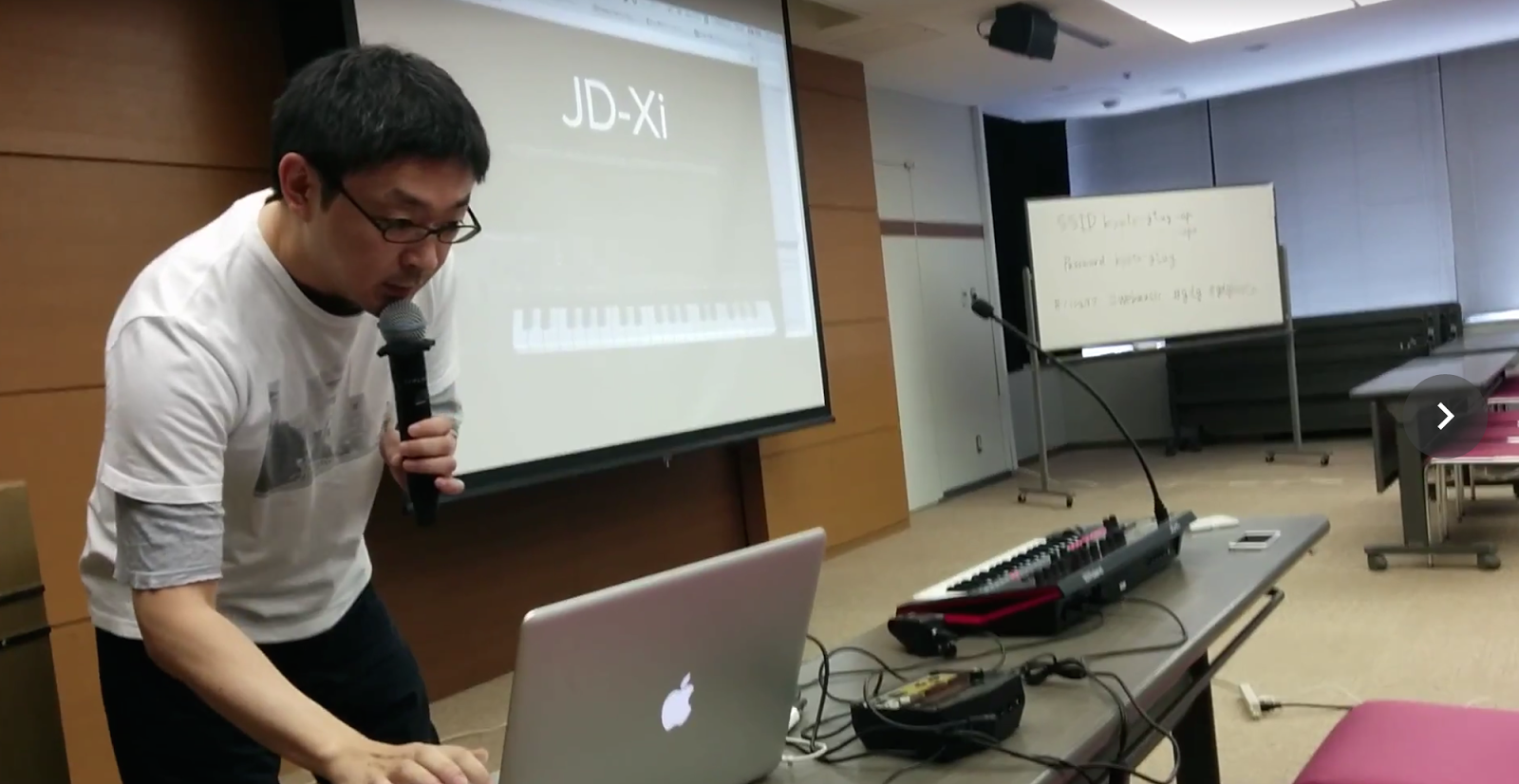 At presentation of @aike1000, he looked like using his iPhone to turn the slides. At the end of his presentation he revealed that his slides is created by HTML5 slide, and also he is using MIDI over Bluetooth LE and Web MIDI API with Web MIDI browser on iOS platform to turn the slides. Day after the hackathon, he published the application on twitter. (the tweet is in Japanese, though..) [Source Code]

After tutors’ presentation is team building. 7 themes were picked up by the summary of questionnaire of “What would you like to hack at this hackathon?”, and that answer is required when attendees RSVP.
7 themes are following:

At first, attendees divide into these themes of groups, and them they have discussion what to hack today before they start hacking in the group. During the discussion, changing theme is one of the choices.

Result of the discussion, 2 themes were reduced. Following list is the final themes.

At 4:30 pm, hacking time is over, and presentation time came. At this moment, most of groups said “we would like to more time…” actually.

By the way, we prepared learning materials for both Web Audio and Web MIDI by Google’s Codelab format. (These are only for Japanese now, but I will translate them into English ASAP.)

Now I explain the applications created at hackathon one by one. 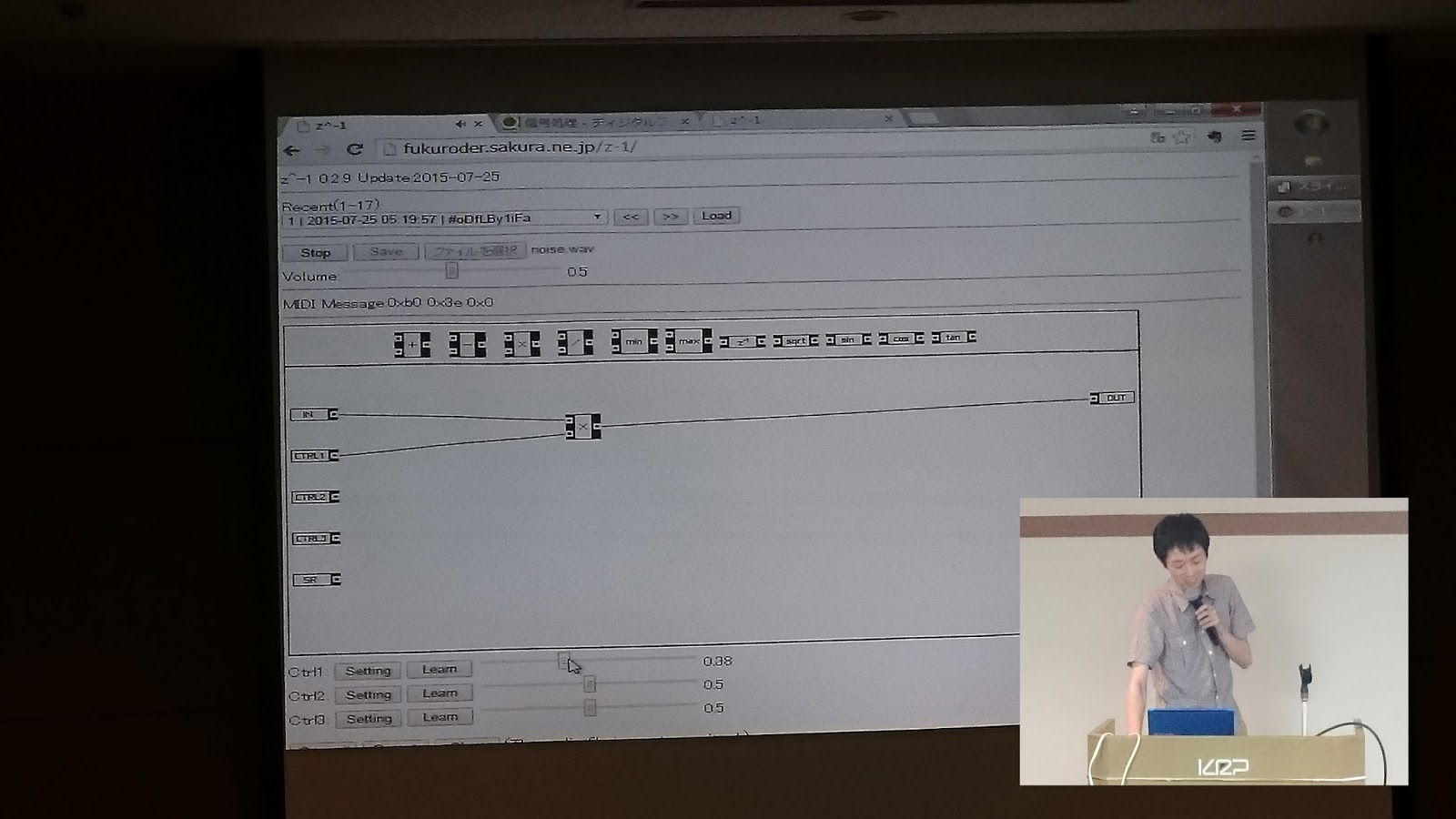 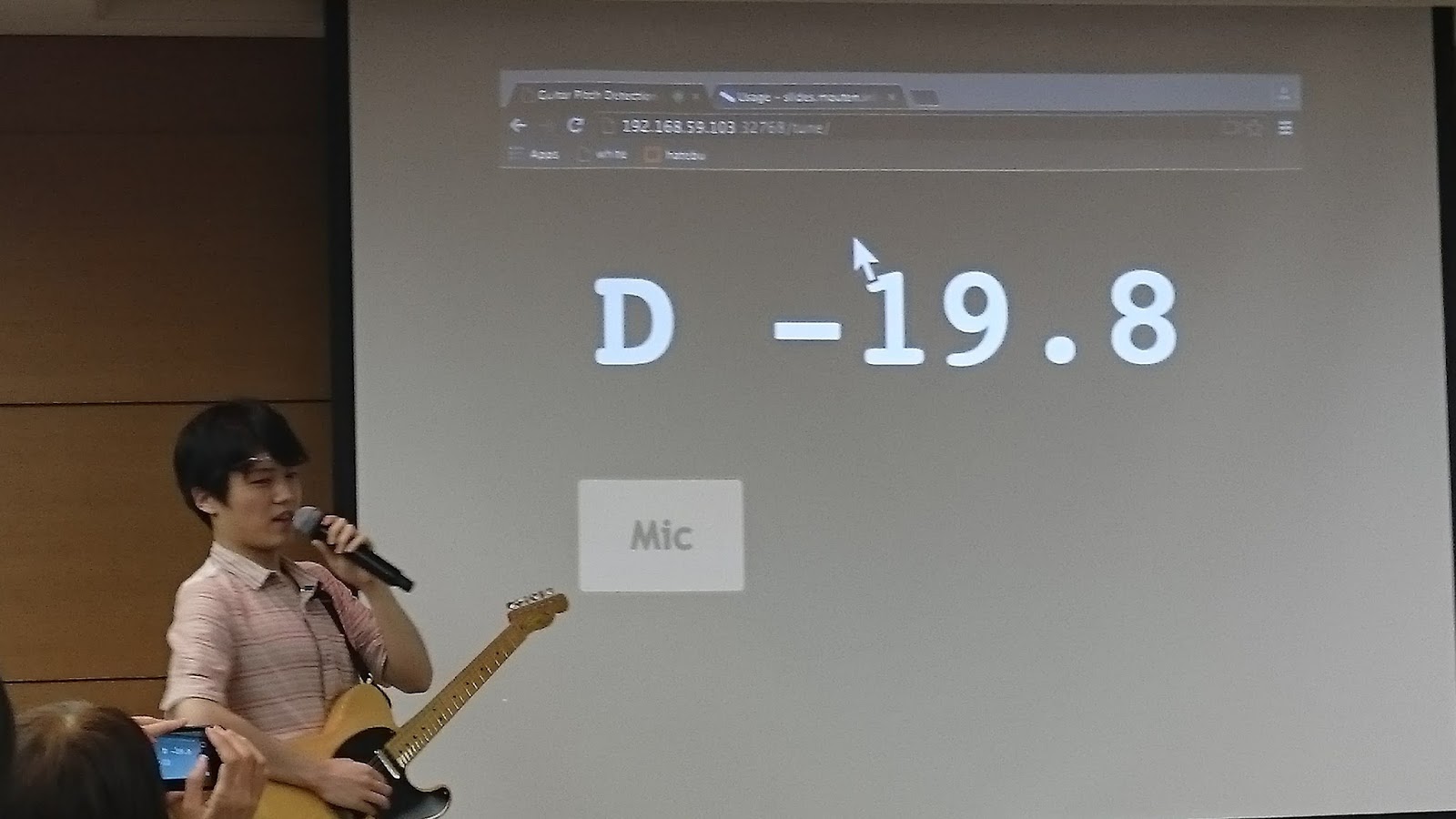 Guitar tuner on Web. @moutend says that “Hardware tuner sometimes not easy to adjust tune by look.”, he solved these weakness of hardware tuner by this application: Uses big letter, Play sound to tune by sound without looking. The number located next to letter (“D” in the picture above) is representing how much cents are different from the right frequency.
But he says that it still have bugs in detecting pitch sometime….. 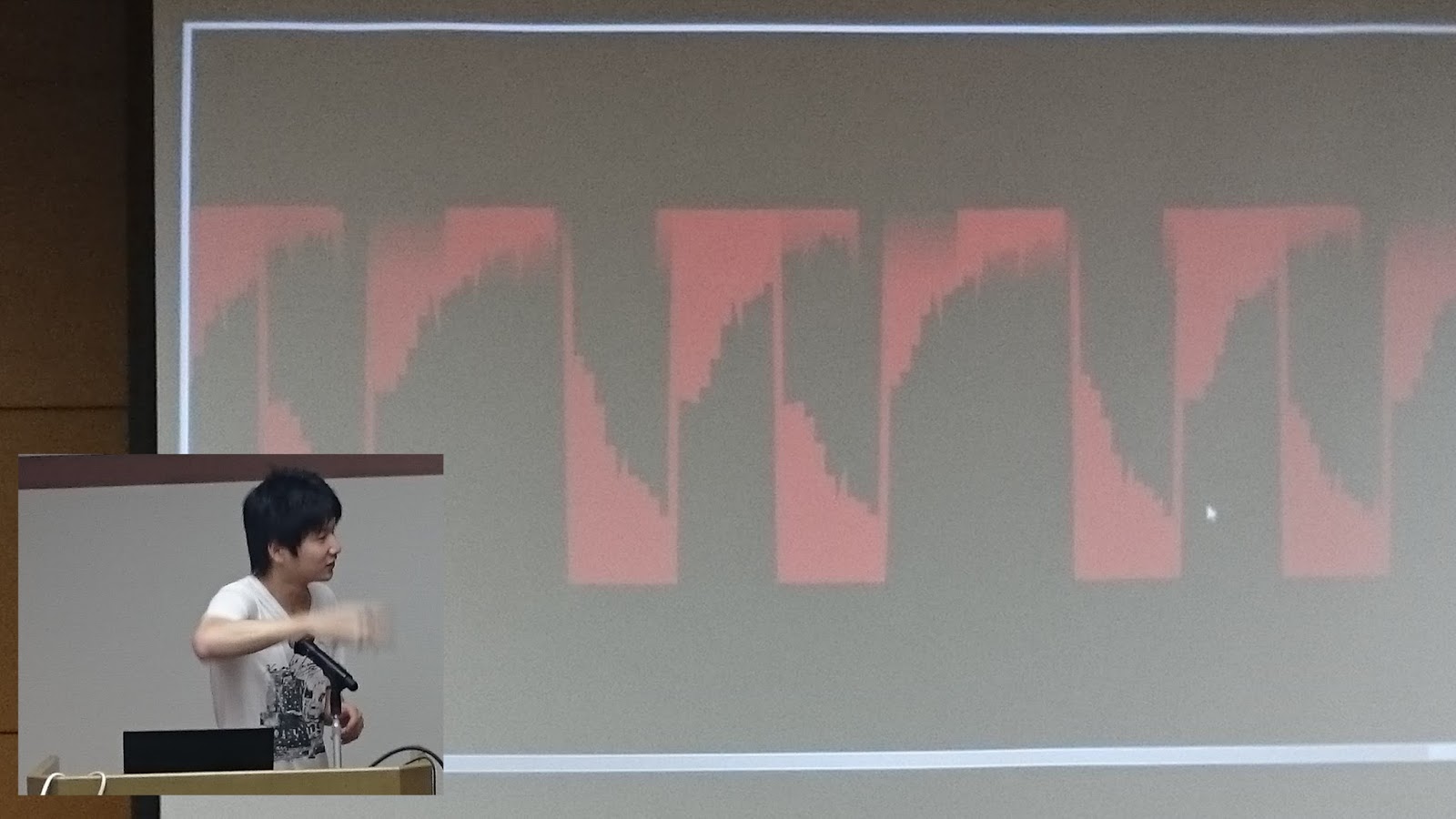 Basic voice is created with Oscillator synced and the implementation is using ScriptProcessor Node. Adding to that, the voice is manipulated by acceleration sensor in iPhone. So frequency is updated when iPhone is shaked.(The picture above is the picture of shaking iPhone. But we can not see because iPhone is shaked too fast…)

GamePad to MIDI by MK 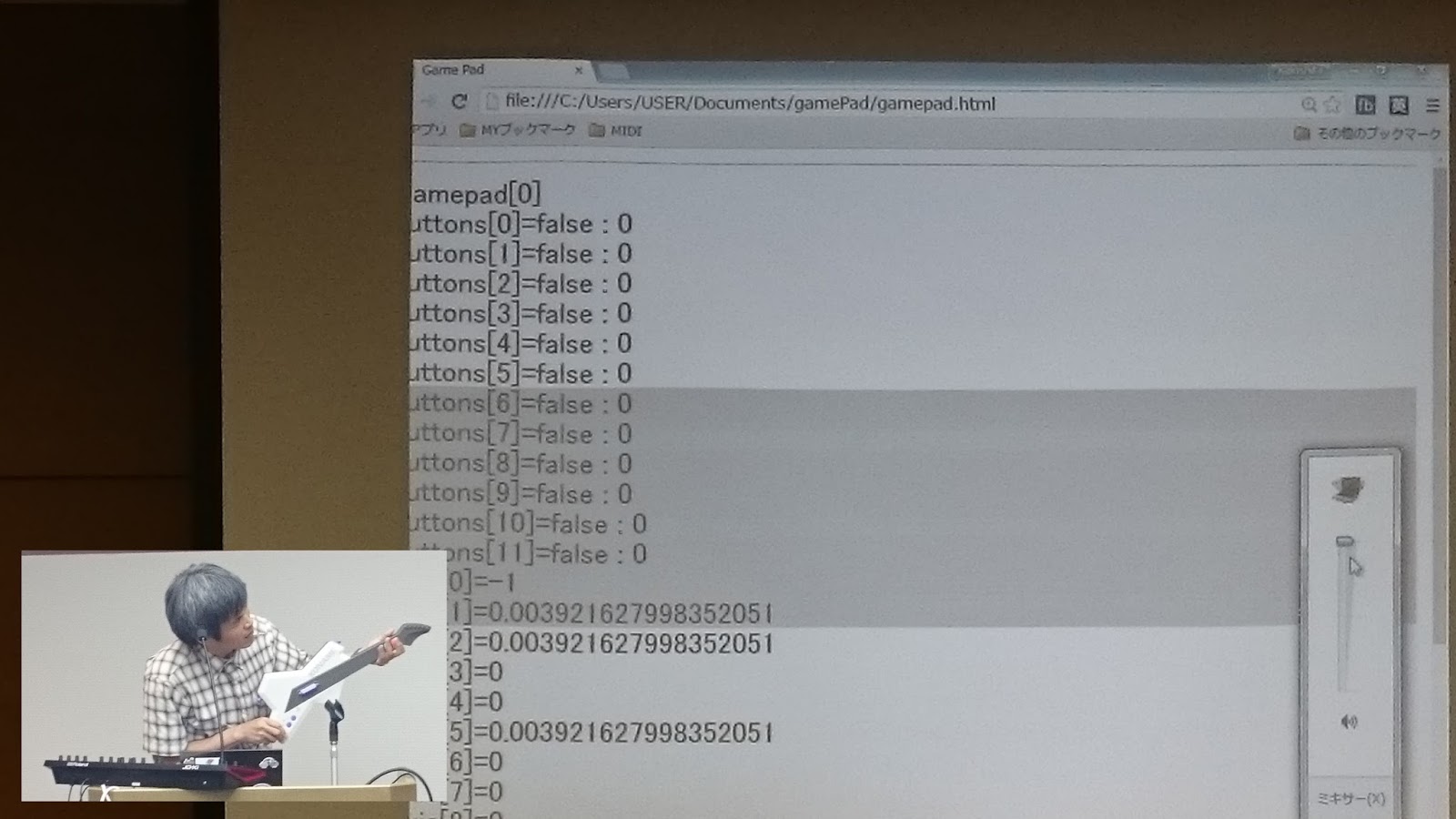 Getting input message from gamepad with gamepad API. Gamepad input is converted to MIDI message, then sending MIDI message to MIDI tone generator(Roland JD-Xi) to play voice. But only “pitch bend down” is activated somehow. 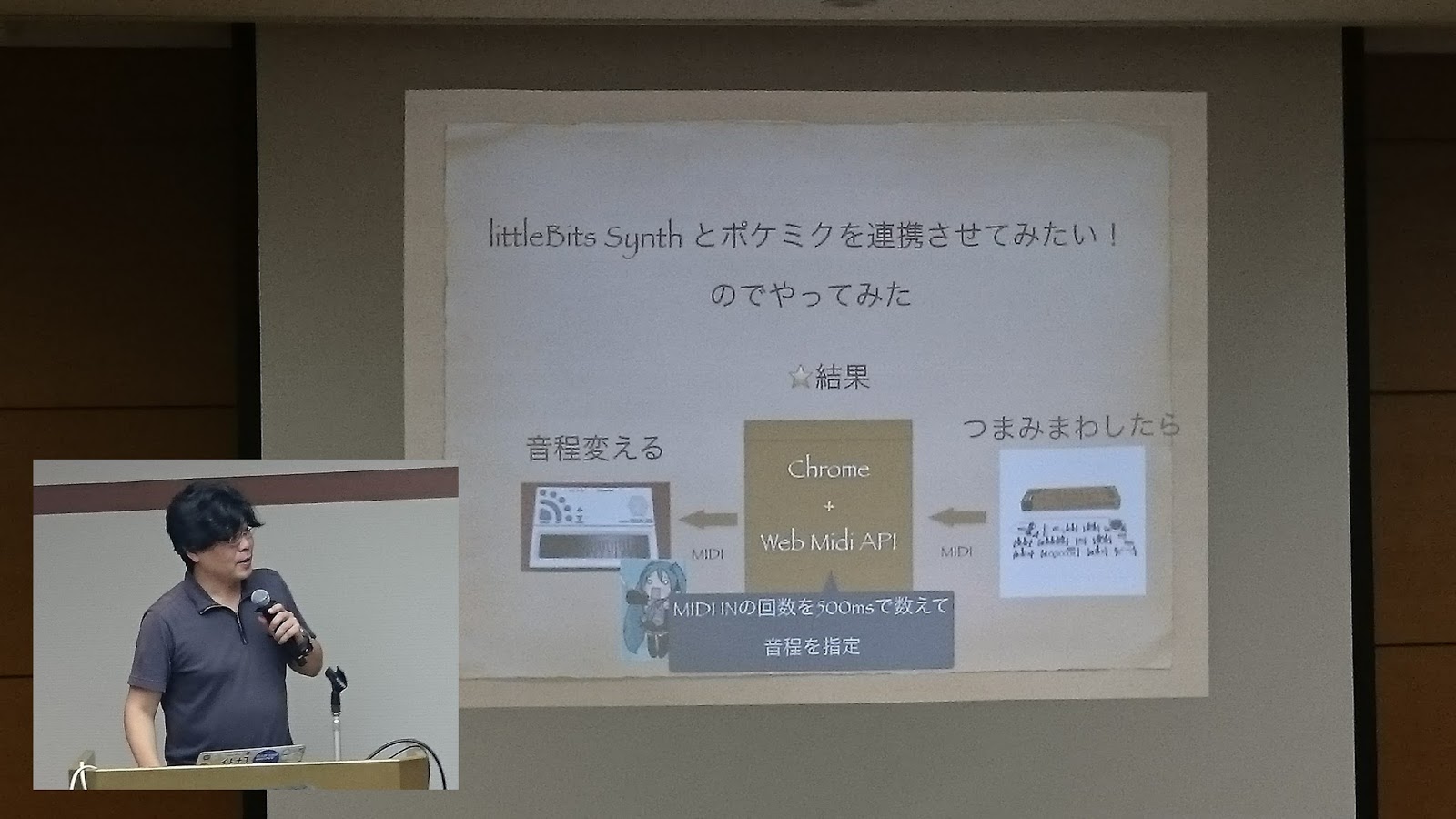 The output from littleBit send to Pocket-Miku through Web browser. The way of defining pitch is counting input signal in each 500ms. 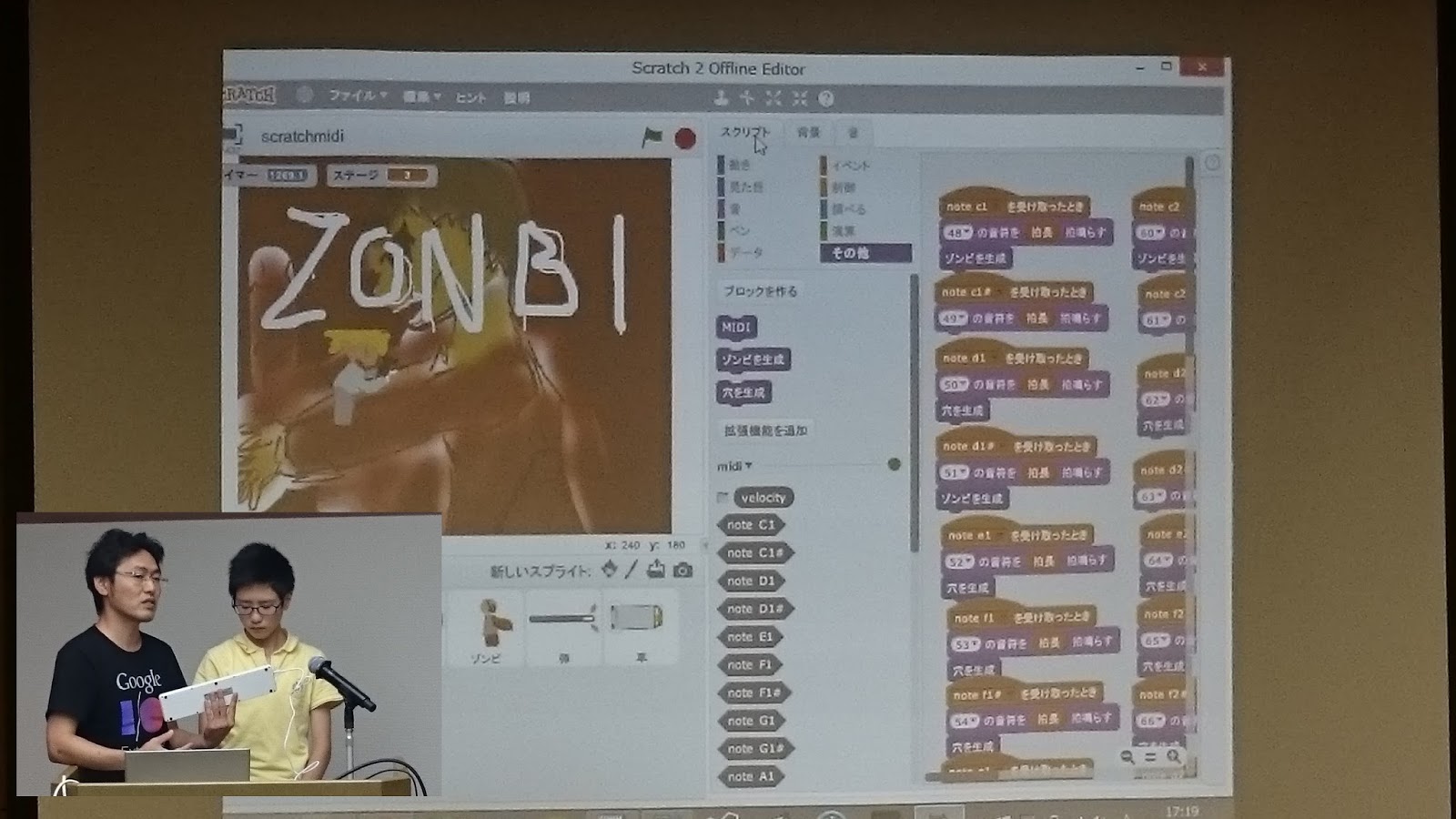 A game of beating zombies. Game engine is build on top of Scratch, and MIDI inputs from Web MIDI API is used to change zombies moving pattern and controlling the number of zombies. Hacking by parent and child is the first time since Web Music Hackaton is started. 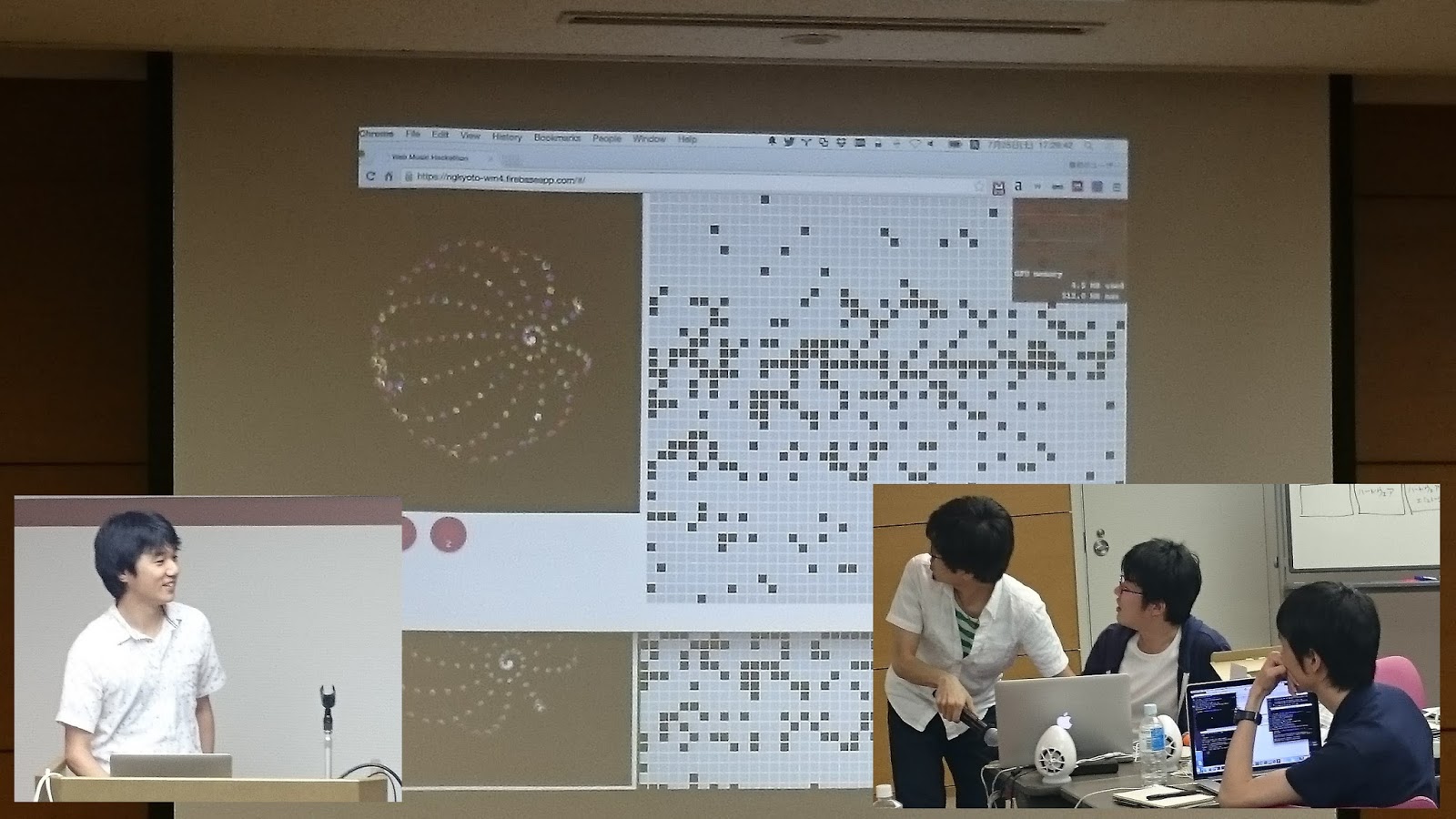 Sequencer by grid system. The application allow to update dots in grid system in realtime with several users. Realtime update mechanism is using “Firebase”. And during the play, sphere in the left to of the application turns around, and the color of the sphere changes by the kind of playing chord. (The picture is when they had a trouble during their presentation. Realtime synchronization was not working correctly somehow. The problem would be network problem, that is access point of wi-fi was used for video streaming and the access point used for this demo was same.)

This team published slide of secret story to build this application. (only in Japanese) 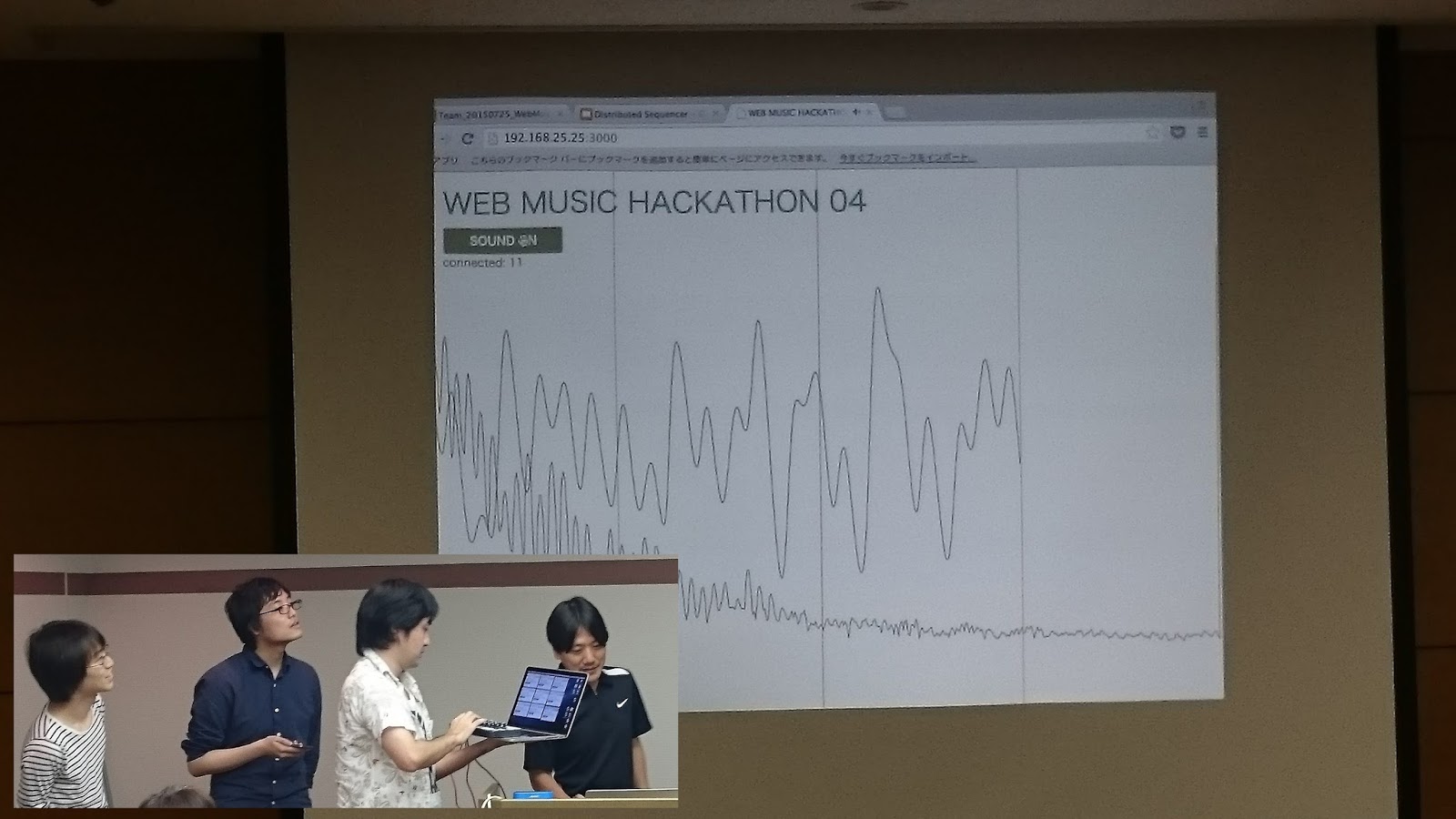 Several clients which has tone generator of Web Audio are connected to servers over WebSocket, and those clients plays with recieving message from server. So it enables to orchestrate with clients which are connected to server.
At their presentation, there were a network problem. The problem might be this, access point was used for video streaming and the access point used for this demo was same.
This team is also providing detailed information in leader’s blog. (Only in Japanese)

Developed application is using KORG CLIPHIT (Make any surface electric drum only with clipping trigger) and Roland TM-2(tone generator especially for Hybrid Drum with trigger) . Connect 2 of CLIPHIT trigger to TM-2, and attach the each clip to your each foot, and TM-2 is also connect to browser by MIDI. So with tapping feet, making drum sound by sending message to TM-2, and that signal is also send to browser by MIDI, eventually browser is able to update graphics in browser window by recieved the MIDI messages.
From his work(he works for Roland), he said “Please use the clip of KORG’s CLIPHIT with Roland’s TM-2 at your own risk.” This notice made attendees’ laugh. 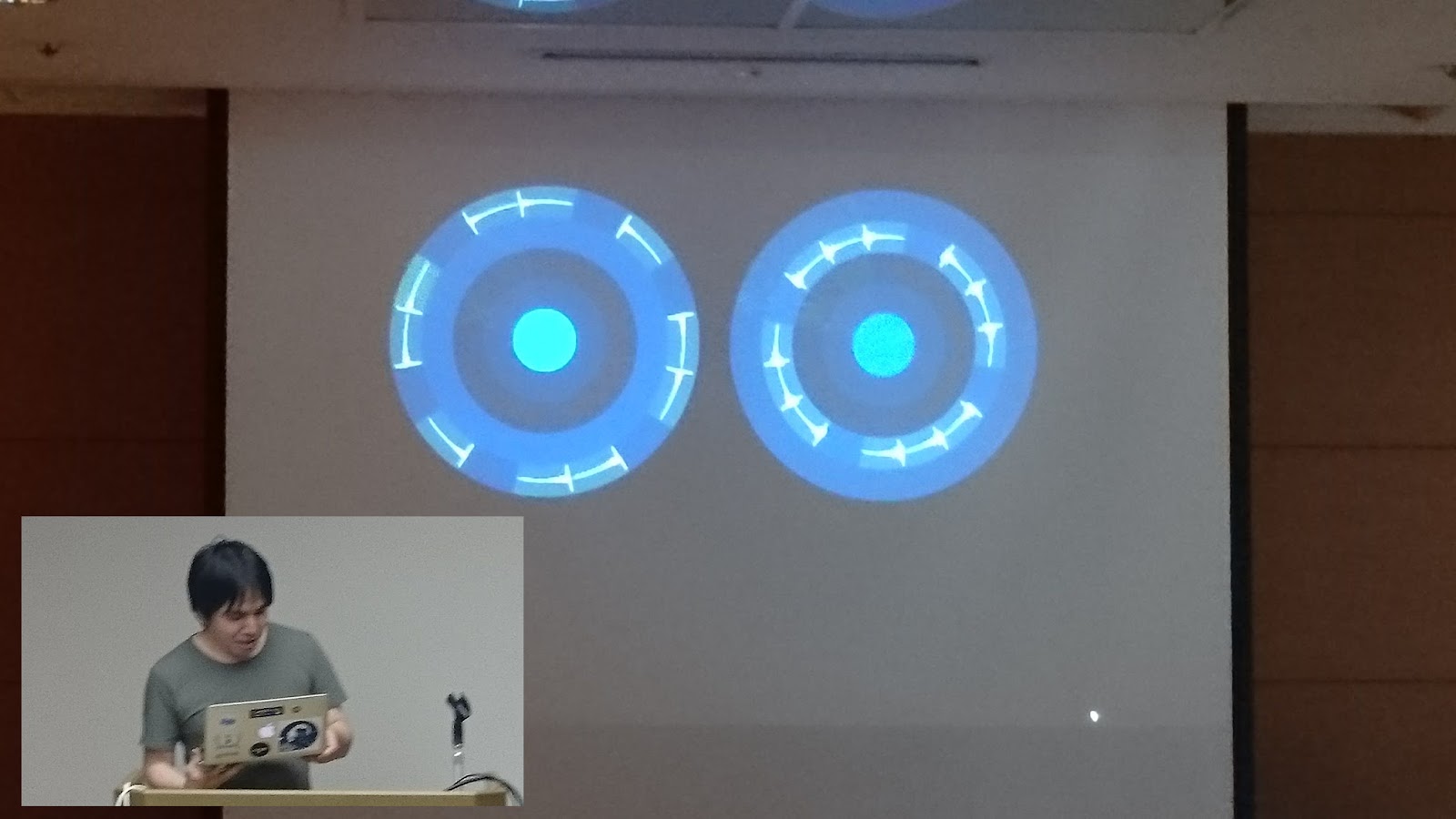 Sometimes, sequence time line of rhythm machines is linear even if the sequence is set to play as loop. Since it is not so intuitive, so what he developed is rhythm machine which time line is shaped to round. Waveform is able to locate on the circumference.

LiveBeats is the web application that create music by inputting music recipe(rhythm patterns, melodies and so on) from application’s command line. This application is also developed by him. This time he added MIDI input feature, and that feature allow users to play a music by MIDI devices along with the music created by command line. In the picture, he is playing a like playing the guitar.


After these presentation, we(staff) selected 3 excelent applications by these three criteria of “Idea”, “Technical” and “perfection”. Actually, the selection process was difficult, because every application has great idea, and high perfection.

It was 4th time of Web Music Hackathon. Idea, technically, and perfection is getting higher and higher in each time. I hope I would like to run another one. I am looking forward to see you at next time!!

This was first time to run an event out side of Kanto area for me. So there are some worries, adding to that a typhoon might direct hit to Kyoto at the day of hackathon. (Eventually, it was not, but it was so close.) But almost all attendees who registered had joined the event and hacking all together. It was awesome things, and I am deeply appreciate that.
And to run hackathon in Kansai area, I want to say thank you for Ms. Kurano of GDG Kyoto, Mr.Tada and Mr. Noda of GDG Kyoto, and all of the staff from GDG. And also really appreciate to Mr. Terado of KRP for providing us a big and great room. Thank you very much!!
Finally, I want to say thank you for @aike1000 to join the hackathon from Sapporo(Hokkaido), and @g200kg from Yokohama as tutor.
I think this hackathon is run by attendees’ passion to build web music applications. So, please keep building your web music applications!!
Thank you very much.

I did sightseeing in Kyoto day after hackathon. I visited 33-Gendo where one thousand of statue of Goddess of Mercy is displayed. MIDIAppy of this time was drawn in reference to the statue by @g200kg. I was amazed by one thousands of statues.(picture below is Kinkaku-ji)